1st session: 'Trumpism after Trump? The USA After the 2020 Election' 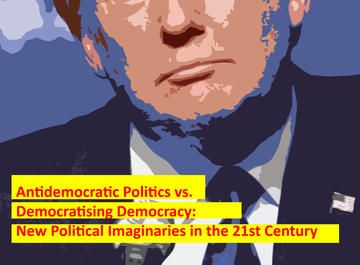 The institutions of liberal democracy are under threat, criticised by national-populist or authoritarian regimes and elites and by social movements taking action for more democracy. The “Western blueprint” remains a huge challenge to any alternative to be defined wherever. Nevertheless, facing the challenges of the 21st century, an increasing number of actors and public intellectuals are following new paths. What sorts of alternative political imaginaries are being developed? Can some of them provide values, concepts or institutions which may foster the enlargement, reframing or hybridisation of democracy?

Imaginaries involve the capacity of actors to overcome a challenging social reality through the projection of a more desirable political horizon. They often rely on ideologies or theoretical models but also include non-discursive dimensions such as rituals, images, symbols, and videos. The seminar aims to analyse and discuss these different dimensions. It will tackle national as well as transnational contexts. What are the connections, comparisons, and differences within and between the national spheres? What are the most important alternatives in the next decade?

1st session: 'Trumpism after Trump? The USA After the 2020 Election' (in cooperation with Nuffield College)

The last US presidential elections have been the most contested in decades, and they aroused the attention in the entire world. Will Joe Biden’s presidency imply the return to democratic normality? Conversely, is the “old normality” over? Will Trumpism persist after Donald Trump? What are the main challenges that the USA face in the 21st century?

To register, please email us at communications@mfo.ac.uk